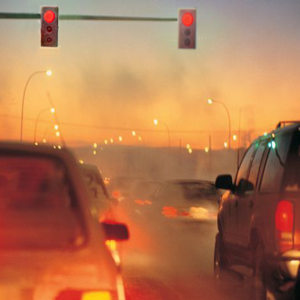 The main oxides of nitrogen are:
- nitrogen monoxide (NO) which is a colorless and odorless gas;
- nitrogen dioxide (NO2) which is a brown-redish gas with a strong, drowning smell.
Nitrogen dioxide in combination with particles in the air can form a brownish-red layer.
In the presence of sunlight, nitrogen oxides can also react with hydrocarbons to form photochemical oxidants.
Nitrous oxides are responsible for acid rain that affects both the terrestrial surface and the aquatic ecosystem.

Anthropic sources:
Nitrogen oxides are formed in the combustion process when fuels are burned at high temperatures but most often they are the result of road traffic, industrial activities, electricity generation. Nitrogen oxides are responsible for smog formation, acid rain, deterioration of water quality, greenhouse effect, and reduced visibility in urban areas.

Effects on population health
Nitrogen dioxide is known to be a very toxic gas for both humans and animals (the degree of toxicity of nitrogen dioxide is 4 times higher than that of nitrogen monoxide). Exposure to high concentrations may be fatal, and at low concentrations it affects lung tissue.
Population exposed to this type of pollutant may have respiratory difficulties, respiratory irritation, lung dysfunctions. Long-term exposure at low concentration can destroy lung tissue resulting in pulmonary emphysema.
People most affected by exposure to this pollutant are children.

Effects on plants and animals
Exposure to this pollutant causes serious damage to vegetation by whitening or death of plant tissues, reducing the growth rate of plants.
Exposure to nitrogen oxides can cause lung disease in animals, which resembles pulmonary emphysema, and exposure to nitrogen dioxide may reduce the immunity of animals by causing diseases such as pneumonia and influenza.

Other effects
Nitrogen oxides contribute to the formation of acid rain and favors the accumulation of nitrates at the soil level, which can cause environmental ecological equilibrium to be impaired.
It can also cause damage to fabrics and discoloration of paints, metal degradation.